When you look at the sky what can you see? Was the first question he ever asked me. Me, a boy of only three, this question had been an unsolved mystery to me and I look at his face an absolute confusion and he gave me a gentle smile and said you’ll understand in time boy with the care of a father he rubbed my head, the memory of that day is still very fresh in my mind. From that day I become his student his every move was my every lesson. He had made sure I had gotten everything I wanted without lack and I made sure I served his every want without mistake.

He had trained my mind more firm than any other. Every day i spent with him he told me “I would make you better than the rest” words I only now understand. By the age of ten (10) all that was needed to be known in my world had been put to memory by his easy words and actions. When it came to swordplay and martial arts I had master so much at that age the he feared my single punch could kill anyone but him and when I was with a sword my movements could only be compared with light.

Now that I think about it there is no how he didn’t expect me to act it as though he was begging me to act. By 12, I had explored the mysteries of four different evil forest and on my return, he told me I still had much to learn which I just couldn’t understand.

Every year of my life we had spent one month, night and day, refreshing all my languages with only an hour rest a week, he believed that a sleep-deprived me was very effective to train in the tongues of others, by the time I was 13 I had become a scholar in all fields of human existence, Easily I watched him and learnt from him for another 7 years on my twentieth birthday after 7 years of him barely looking or talking to me I finally felt it was enough and took his most precious item, a book he had treasured, I believe more than his life, as I stole it from his shelf I ran to woods where a portal stood waiting for me to hide from him in the one place he can’t fine me, I was going to hide In oblivion and as I ran, I opened the first page of the book I saw it, the signature boldly written ‘The Blacksmith’ 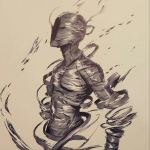 Liman is a critic of the arts because of his analytical view but he is a big fan of poetry. His hobbies include Writing, Reading, and Research. He aims to not only entertain but also Educate his readers with interesting methods, and references to history and so on.

Javascript not detected. Javascript required for this site to function. Please enable it in your browser settings and refresh this page.